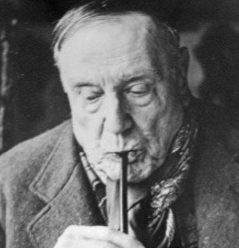 Maurice de Vlaminck (1876 – 1958) was a French painter. Along with Henri Matisse and Andre Derain, he is considered one of the principal figures in the Fauve movement, a group of artists from 1904 – 1908 were united in their use of intense color. He was one of the Fauves at the controversial Salon d’Automne exhibition of 1905. He was influenced by Van Gogh and Cezanne. After visiting Van Gogh’s exhibition, Vlaminck declared that he “loved Van Gogh that day more than my own father.”