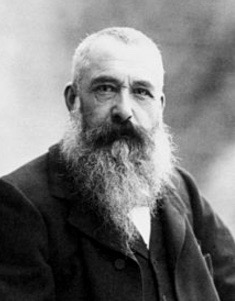 Claude Monet (1840 – 1926) was a founder of French Impressionist painting. The term “Impressionism” is derived from the title of his painting Impressiom, which was exhibited in 1874 in the first of the independent exhibitions mounted by Monet and his associates as an alternative to the Salon de Paris.

In the later 1860s, Monet and other like-minded artists met with rejection from the conservative Academie des Beaux_arts, which held its annual exhibitiob at the Salon de Paris. During the latter part of 1873, Monet, Auguste Renoir, Camille Pissarro, and Alfred Sisley organized the Anonymous Society of Painters, Sculptors and Engravers to exhibit their works independently. In 1874at their first exhibition, Monet exhibited the work that was to give the group its lasting name. He was inspired by the style and subject matter of the previous modern painters Camille Pissarro and Edouard Manet.
Monet’s painting s are among the highest prices sold at auction houses. In 2008, Le Bassin aux nympheas was sold at $80, 451,178.